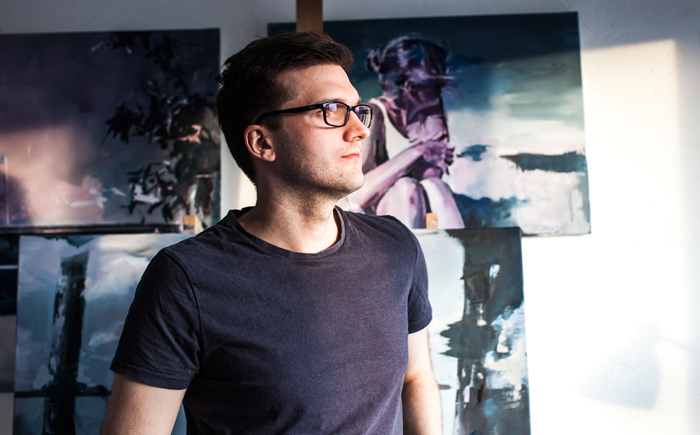 a painter of the young generation from the realm of new realism. The leading means of expression in his work is painting, drawing and mixed techniques. He is interested in man, both his physicality and the emotional world. His work is a part of modern figurative painting. Kozłowski often places his characters in the context of space, on the one hand, industrial and on the other, of raw nature, against which he contrasts the fragility of the individual. In some of his works he shows the motive of escape from the rushed world. Tomasz Kozłowski’s paintings are characterized by a combination of precision of the workshop and painting expression. The artist compiles a concrete, palpable world with the intensity of the painting gesture. He unexpectedly introduces rubs of the spatula and stark expressive strokes, creating the impression that what we are looking at is not a reflection of the reality but the surface of the canvas. The emphasis that we are dealing with the picture. Kozłowski’s painting is the underlining of the moment and emotions that accompanied the creation of his work. An important issue for the artist is the experiment and the searching for an answer to the limits of painting.

In 2008 he graduated from the Academy of Fine Arts in Lodz (Poland). He is a two-time finalist of the Warsaw Grand Prix of the Franciszka Eibisch Foundation (2012, 2016). His paintings were presented at many exhibitions and reviews of contemporary art. Numerous works are in private collections, among others in Poland, United States, United Kingdom and France. He also works in graphic design, creates posters and publishing projects. He lives and works in Lodz.